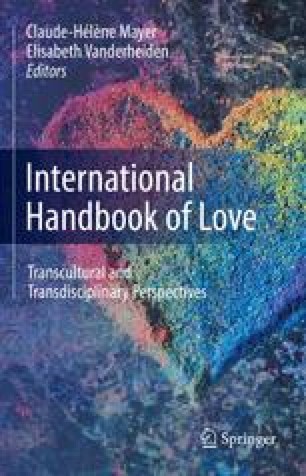 “There Are as Many Kinds of Love as There Are Hearts”: Age-Gap Relationships in Literature and Cultural Attitudes

Love comes in many forms, as we all know and as the quote from Anna Karenina by Tolstoy holds. Some forms are more frequent than others. As a consequence, less frequent forms may be either tolerated or dismissed as deviant, and therefore socially sanctioned. And different cultures may deal with such forms very differently. In this chapter we look at one form that is less frequent, namely age-gap relations: love relations between either an older man and a considerably younger woman, or vice versa: an older woman and a considerably younger man.

Since it may be expected that nations differ in their attitudes toward such relationships, we investigated two that are (geographically and culturally) wide apart: Brazil and Ukraine.

We offer some examples of empirical methods (Empirical methods aim at knowledge that comes from observation and experience, i.e., evidence gathered through the senses that can be analyzed independently by anyone wishing to re-analyze the data gathered.) with which to investigate short time and longitudinal effects of confronting fictional love stories.

We report a case study, in which we checked how social views on intimate relationships involving a substantial age difference between partners were influenced by reading literary passages from canonical literature, focusing on age-gap relationships. The results cast light on the views on age-gap relations in these respective cultures and thereby highlight their national mentality. Additionally, the findings lend support to the idea that reading literature influences human attitudes.

Love Age-gap relationships Empirical research Cultural attitudes Literary reading Effects of reading on perceptions of love
This is a preview of subscription content, log in to check access.

Though in the research the languages of the questionnaires were Portuguese and Russian, here we append the original versions of the passages read in the experiment.

A.1 The OM Case (“Happiness” Passage)

Rhett was leaning over her when she woke, and without a word he picked her up in his arms like a child and held her close, his hard muscles comforting, his wordless murmuring soothing, until her sobbing ceased.

He gently placed her on the bed, fumbled in the darkness and lit a candle. In the light his face with blood-shot eyes and harsh lines was as unreadable as stone. His shirt, opened to the waist, showed a brown chest covered with thick black hair. Scarlett, still shaking with fright, thought how strong and unyielding that chest was, and she whispered: “Hold me, Rhett.”

“Darling!” he said swiftly, and picking her up he sat down in a large chair, cradling her body against him.

“It must be awful to dream of starvation after a seven-course dinner including that enormous crawfish.” He smiled but his eyes were kind.

“Oh, Rhett, I just ran and ran and hunt and I can’t ever find what it is I am hunting for. It’s always hidden in the mist. I know if I could find it, I’d be safe forever and ever and never be cold or hungry again.”

“Is it a person or a thing you’re hunting?”

“I don’t know. I never thought about it. Rhett, do you think I’ll ever dream that I get there to safety?”

“No,” he said, smoothing her tumbling hair. “I don’t. Dreams aren’t like that. But I do think that if you get used to being safe and warm and well fed in your everyday life, you’ll stop dreaming that dream. And, Scarlett, I am going to see that you are safe.”

“Thanks for the crumbs from your table, Mrs. Dives. Scarlett, I want you to say to yourself every morning when you wake up: ‘I can’t ever be hungry again and nothing can ever touch me so long as Rhett is here and the United States government holds out.’”

A.2 The OM Case (“Frustration” Passage)

He was in his mid-thirties, older than any beau she had ever had, and she was as helpless as a child to control and handle him as she had handled beaux nearer her own age. He always looked as if nothing had ever surprised him and much had amused him and, when he had gotten her into a speechless temper, she felt that she amused him more than anything in the world. Frequently she flared into open wrath under his expert baiting, for she had Gerald’s Irish temper along with the deceptive sweetness of face she had inherited from Ellen. Heretofore she had never bothered to control her temper except in Ellen’s presence. Now it was painful to have to choke back words for fear of his amused grin. If only he would ever lose his temper too, then she would not feel at such a disadvantage.

A.3 The OW Case (“Happiness” Passage)

She had decided how she was going to treat him. She would be amiable, but distant. She would take a friendly interest in his work and ask him about his examination. Then she would talk to him about Roger. Roger was seventeen now and in a year would be going to Cambridge. She would insinuate the fact that she was old enough to be his mother. She would act as if there had never been anything between them and he would go away, never to see her again except across the footlights, half convinced that the whole thing had been a figment of his fancy. But when she saw him, so slight, with this hectic flush and his blue eyes, so charmingly boyish, she felt a sudden pang. Evie closed the door behind him. She was lying on the sofa and she stretched out her arm to give him her hand, the gracious smile of Madame Récamier on her lips, but he flung himself on his knees and passionately kissed her mouth. She could not help herself, she put her arms round his neck and kissed him as passionately.

A.4 The OW Case (“Frustration” Passage)

It was like a knife in her heart. He had never spoken to her in that tone before. But she laughed lightly and getting up took the whisky he had poured out for her and sat down in a chair opposite him. The movement he had made, the words he had spoken, were instinctive and he was a trifle abashed. He avoided her glance and his face once more bore a sulky look. The moment was decisive. For a while they were silent. Julia’s heart beat painfully…

“I know, and I’m terribly fond of you. You’re great fun to go about with and you’re always so well turned out, you’re a credit to any woman. I’ve liked going to bed with you and I’ve a sort of notion you’ve liked going to bed with me. But let’s face it, I’ve never been in love with you any more than you’ve been in love with me. I knew it couldn’t last. Sooner or later you were bound to fall in love and that would end it…”

The moment he had gone she turned out the lights and went to the window. She peered cautiously through the curtains… Tears, tears that nobody could see, rolled down her cheeks. She was miserably unhappy.